After the sad death of Aubrey Bowman, Clarion once again had to face the hard decision of who to approach to replace such a great character.  Although the role of president is not one which necessitates a great physical input, it is a key role, warranting an individual who upholds values of peace and socialism, and a love of music.

We first heard about Tayo Aluko when Irene Rickman brought an article from the Morning Star to a rehearsal. It was about how a young Nigerian born singer had written a script about Paul Robeson. We have seen a number of people through the years sing Robeson’s songs, some truly amazing and inspiring. But there was something which intrigued us about Tayo – his passion to ensure Robeson’s legacy would be continued, and his desire to tell the world about this great talent.

And so began an occasional email correspondence, and an overwhelming admiration for Tayo’s determination to promote the show and extend his audience.

A native of Nigeria, Tayo attended boarding school and university in England. Whilst working as an architect in Liverpool, he appeared as guest soloist with a number of orchestras, music societies, choirs and brass bands in the UK, Germany Ireland and Nigeria. He also performed lead roles in various operas and stage musicals, and as a writer contributed articles to several UK newspapers and magazines.

In 1995 in SeftonPark, Liverpool, a woman heard him singing and said that he reminded her of Paul Robeson. Intrigued, he began to research the singer’s history, and in 2005 he began writing Call Mr. Robeson: A Life, with Songs, spanning the historic figure’s life from the age of six to his retirement in the 1960s.

The play is an astonishing journey through key moments in Robeson’s life, and succeeds in reviving his spirit and passion, and ensuring a new generation is introduced to the renowned artist, and his history of civil rights and peace activism.

Tayo has travelled the world with his play, which has been described as “A stunning piece of musical theatre”, and won many awards with it along the way.  In February 2012 – 83 years after Robeson made his big debut at Carnegie Hall – Tayo Aluko performed Call Mr. Robeson on that same stage. It was also Tayo’s 50th birthday, and the standing ovation he received on that occasion was a fitting tribute to him and to Robeson, and recognition of the hard work and dedication Tayo has given to spreading Robeson’s message of peace, equality and justice.

For more details of Tayo’s other works, visit the Tayo Aluko and Friends site here. 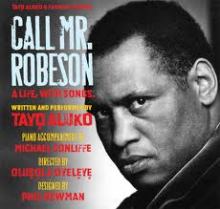